We’re Still Wild After All These Years

The Milwaukee County Zoo is a serene home to more than 2,200 mammals, birds, fish, amphibians, and reptiles, with 330 species represented. However, the Zoo has become more than that to visitors. It is a site for special events, holiday celebrations, summer concerts, and exhibits.

Recognized as one of the country’s finest zoological attractions, the Milwaukee County Zoo serves as a resource to educate, entertain and inspire. 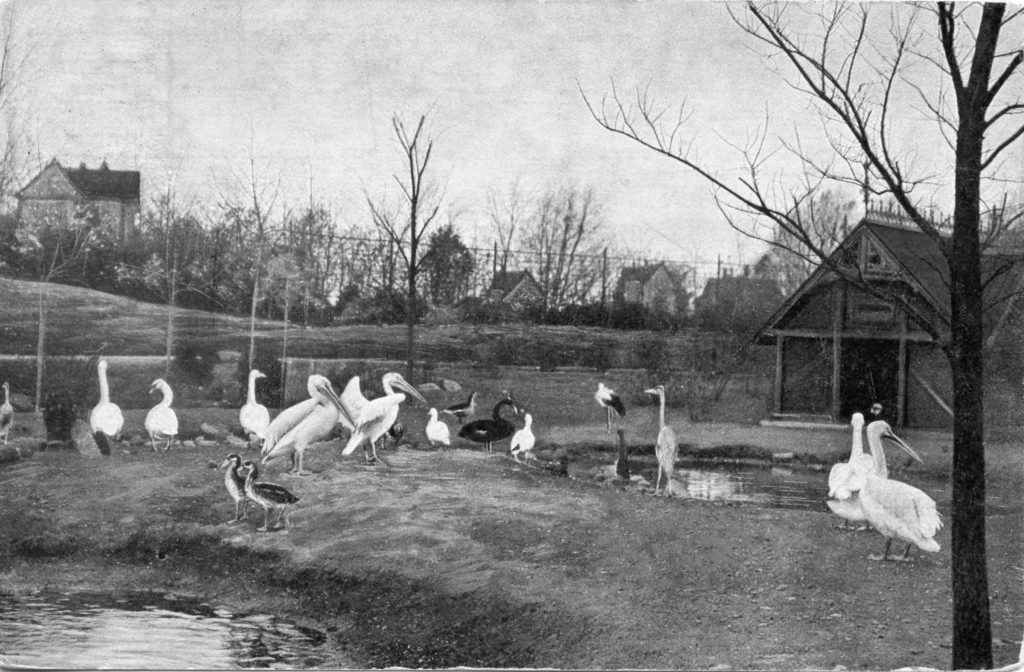 The wildness began in 1892 when the Milwaukee County Zoo was a simple miniature mammal and bird display in Milwaukee’s downtown Washington Park. By 1902, the Zoo expanded to 23 acres and had acquired a roaring 800 animals. Thirty-two years later, the Zoo became an entity of the Milwaukee County Park Commission. The arrangement gave the Zoo the resources it needed to grow and prosper. The chance to grow surfaced in 1958 when the Zoo moved to its present location on 190 acres of beautiful parkland where currently 330 species of animals are on exhibit. 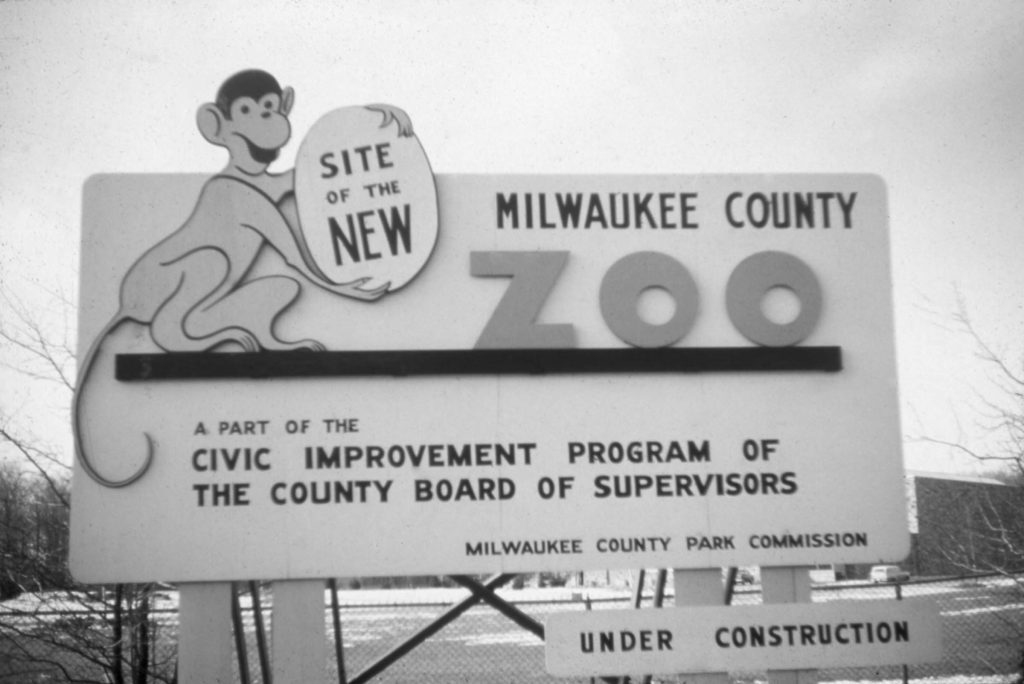 The first decade at the Zoo’s new location saw several developments: The Primate Building, Monkey Island and Winter Quarters construction. In the early 1960s, Grizzly, Polar and Brown Bear dens were completed, as were the Feline, Pachyderm, Giraffe, Bird, Small Mammals and Aquarium/Reptile Buildings. In the 1970s, the Zoo continued to grow: The Children’s Zoo, Train Shed and Zoo Hospital were constructed. The Gift Shop and Zoo Pride, the Zoological Society’s volunteer group, also were established during this decade of expansion. 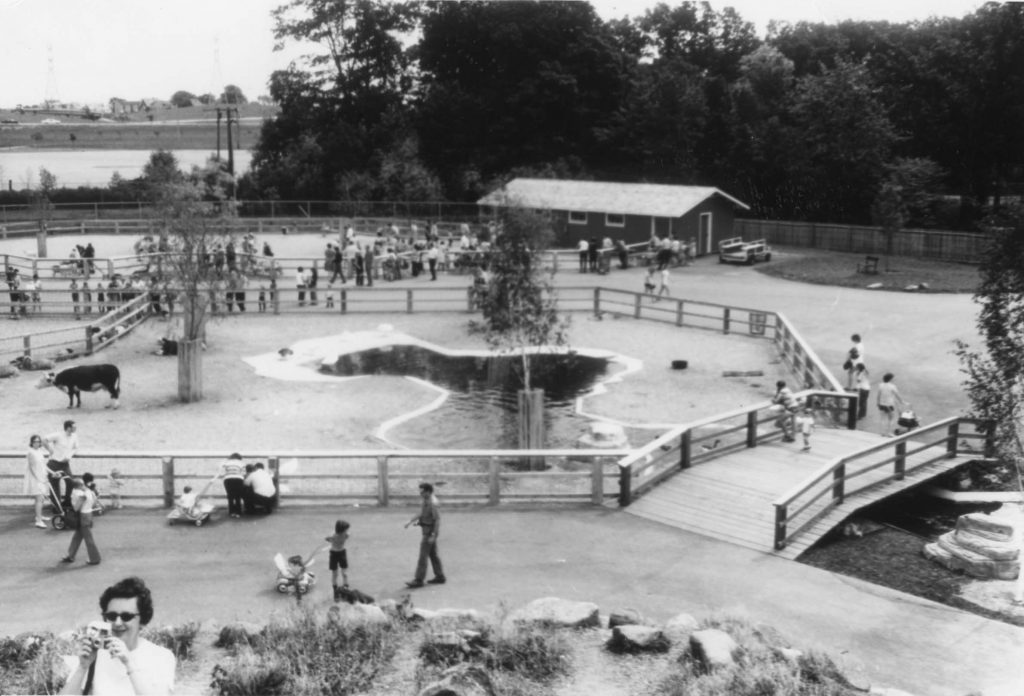 Since 1976 the Milwaukee County Zoo has maintained its accreditation in the Association of Zoos and Aquariums (AZA). The Zoo continues its involvement in the propagation and conservation of endangered species; currently engaged in several significant breeding programs, including Humboldt penguins. Humboldt penguins are a vulnerable species, with wild populations at risk for extinction.

The Zoo also is home to one of the largest zoo-born groups of bonobos, a highly endangered species of great ape. Each new bonobo birth shows the Zoo’s commitment to conservation programs such as the Species Survival Plan® (SSP) in which the Zoo participates.

Charles Wikenhauser was the Zoo director from 1990 until his retirement April 1, 2021. After 31+ years of service, he is the longest-serving director of the Zoo. During his tenure, Wikenhauser focused on strengthening the Zoo’s role in conservation and the propagation of species, animal welfare and enrichment.

In August 2021, Amos Morris started his tenure as the Zoo’s new director. Morris has an extensive career in the animal profession, working at seven different zoos in various roles including zookeeper, curator and director.

A 151-member full-time staff provides the necessary support to maintain a high-quality park, while continually developing innovative ways to help the Zoo reach and maintain attendance and revenue goals. 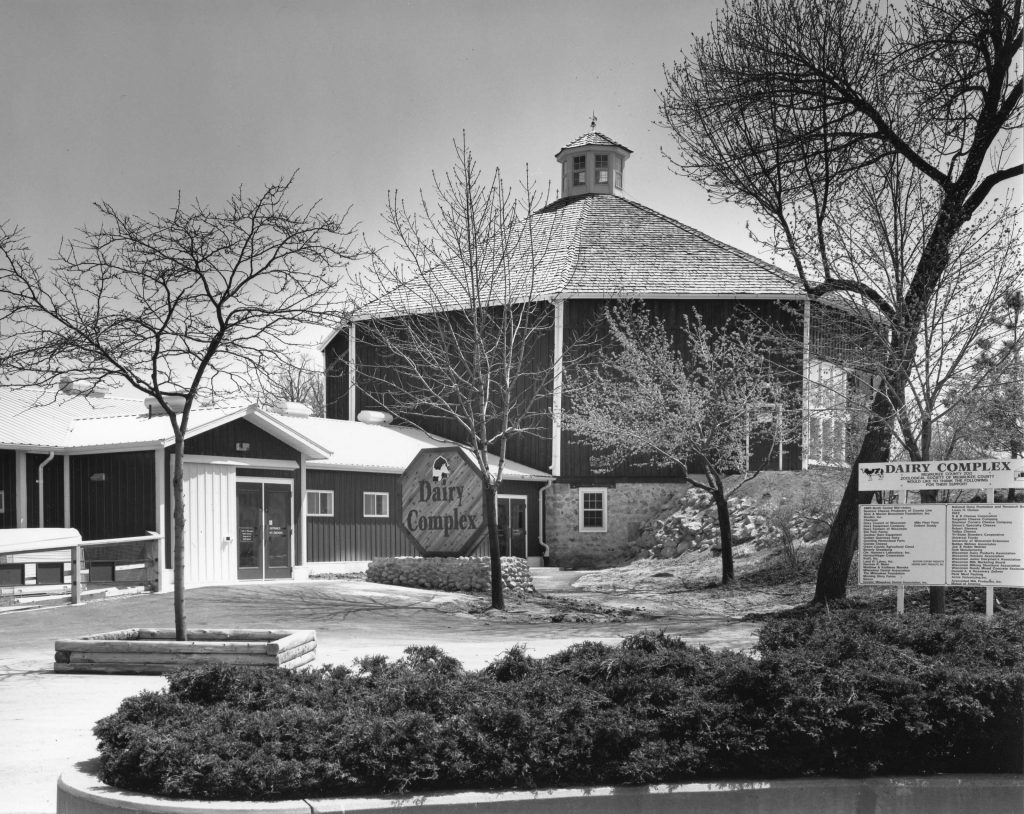 To remain current in its operations, and adhere to the growing needs of the animals, the Zoo initiated an expansion and renovation master plan in 1985. This plan saw the completion of the Wolf Woods, the Polar Bear and Sea Lion Exhibits, the Dairy Complex and the Peck Welcome Center.

More additions and renovations have taken place at the Milwaukee County Zoo. The $10.7 million primate facility is one example. Apes of Africa opened in 1992 and houses Western lowland gorillas and bonobos. The complex was designed to closely represent the West African rain forest. It provides the gorillas and bonobos with surroundings that are similar to their natural environment.

In 2002, the Zoo unveiled a renovated Macaque Island outdoor exhibit for the Japanese macaques. These lively animals have a higher mountain to climb on, more nooks and crannies to hide behind and additional enrichment items to keep their minds active. 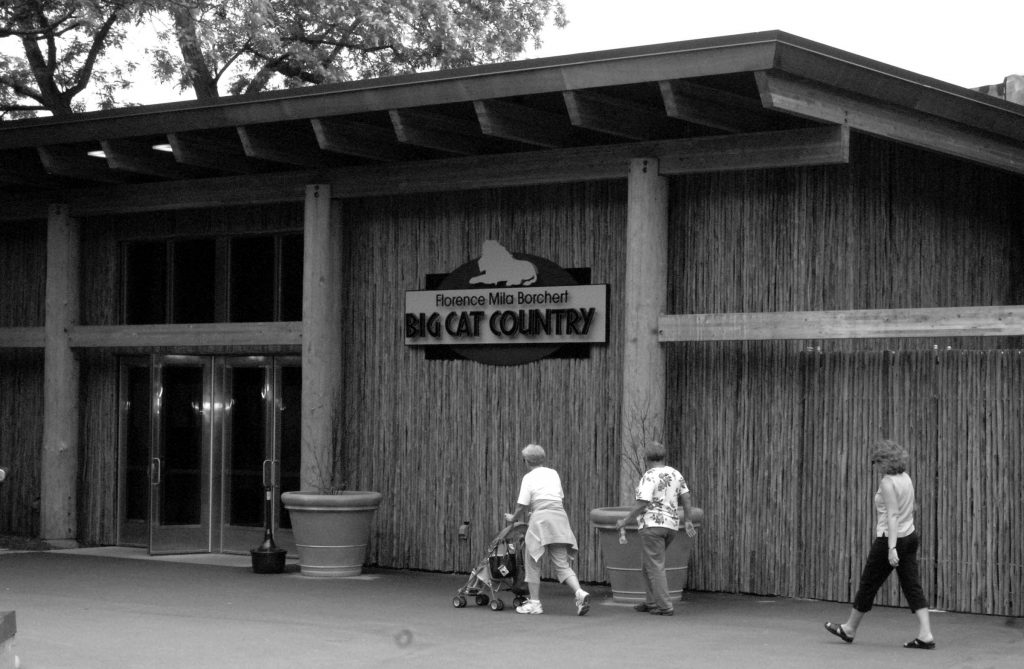 The year 2003 marked the start of the Feline Building renovation. The $7.2 million project provided larger and more realistic exhibit spaces for these magnificent animals, enhancing their quality of life. The Florence Mila Borchert Big Cat Country was unveiled in 2005 and showcased new residents like jaguars and young African lions.

The year 2003 also marked the completion of the Animal Health Center. Made possible by Milwaukee County, the Zoological Society and major gifts from the Gretchen and Andrew Dawes Charitable Trust and Holz Family Foundation, this facility serves to further enhance the veterinary care of the animal collection.

Features of the Animal Health Center include: a 1,000-square-foot observation area for the public to view surgery and treatment rooms, wards with shallow pools for waterfowl, cold rooms for animals such as penguins, warm rooms for reptiles and sterile surgery rooms. 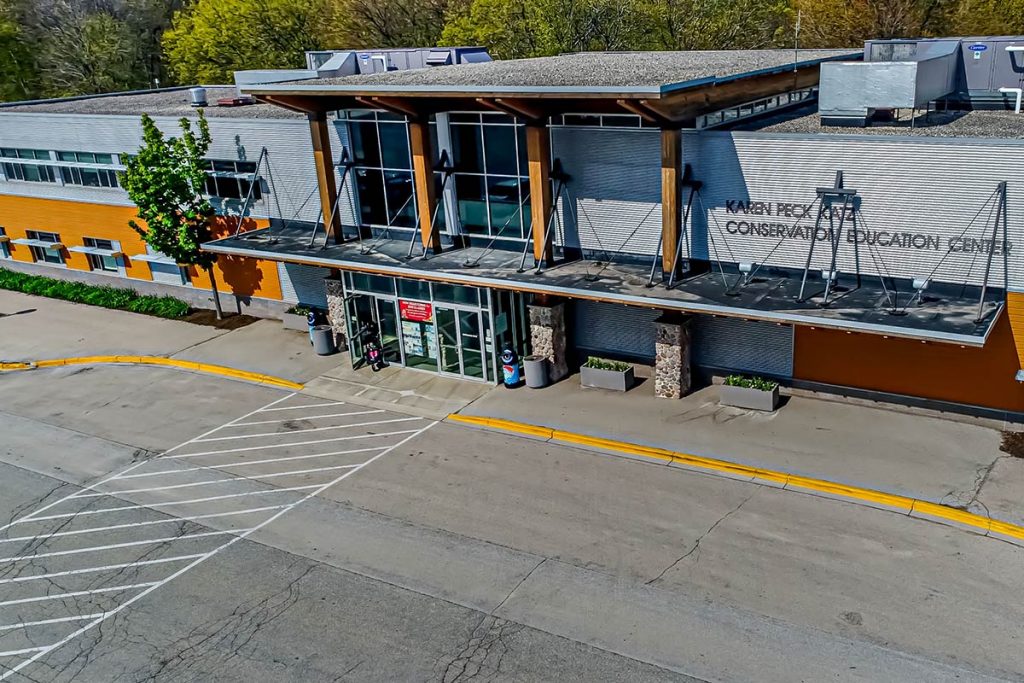 In 2005, the Zoo opened a renovated Northwestern Mutual Family Farm, formerly the Children’s Zoo. Visitors can get up close with native wildlife and farm animals, as educational presentations are offered in the Stackner Animal Encounter Building. A playground with various amenities opened in 2015, in addition to the Kohl’s Wild Theater venue. 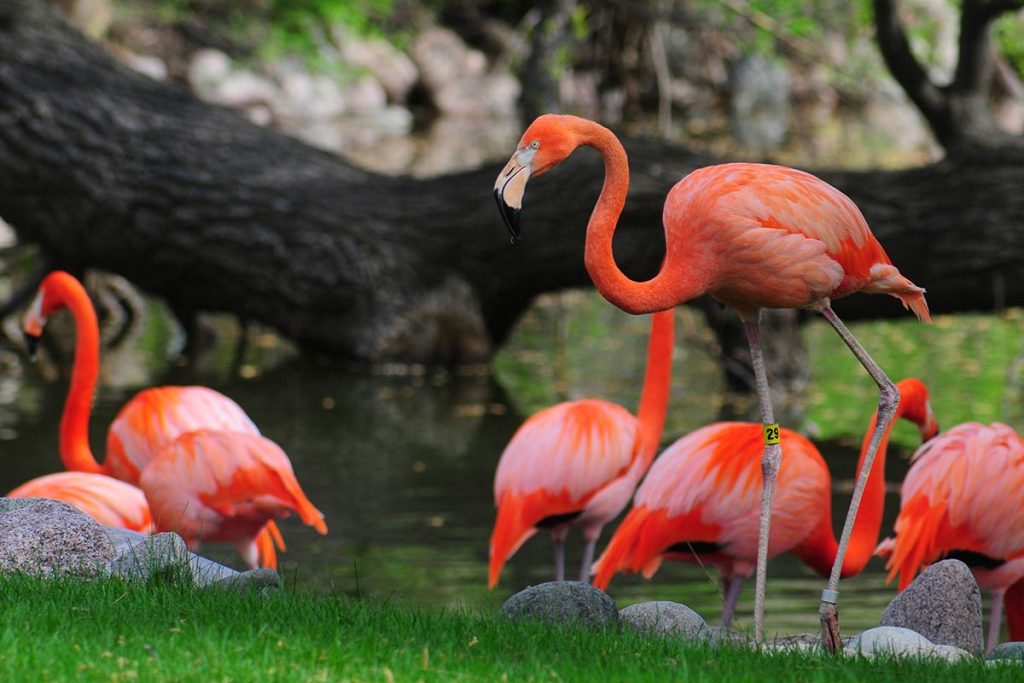 In the summer of 2008, the Zoo welcomed a flock of Caribbean flamingoes, who took up residence across from the Mahler Family Aviary. Visitors come face to face with these striking birds in their lush habitat, the Idabel Wilmot Borchert Flamingo Exhibit and Overlook. A new species, Chilean flamingoes, joined the flock to live alongside the resident group.

Also, in 2008, the U.S. Bank Gathering Place opened to the public. This attractive area features a spacious, light-filled atrium with a renovated Flamingo Café, a counter-style snack bar, coffee shop, customer-service area and new restrooms. This building marked the final project of the New Zoo II Capital Campaign to improve the Zoo. The $30 million-plus campaign, initiated in 2001, was run by the public-private partnership of Milwaukee County and the non-profit Zoological Society. 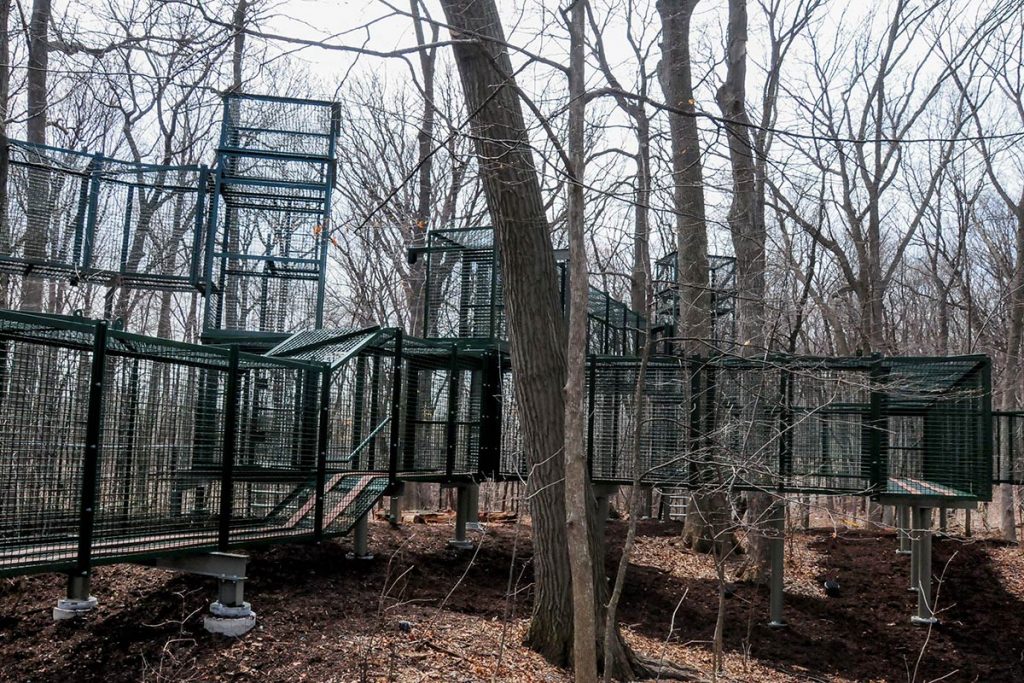 In 2011, an outdoor public exhibit for the bonobos was unveiled. These rare and charismatic great apes (the smallest of the ape species) can explore 500 feet of elevated mesh passageways displayed in the forest. The area was specially designed to replicate the bonobos’ native habitat in the Democratic Republic of Congo in Africa. 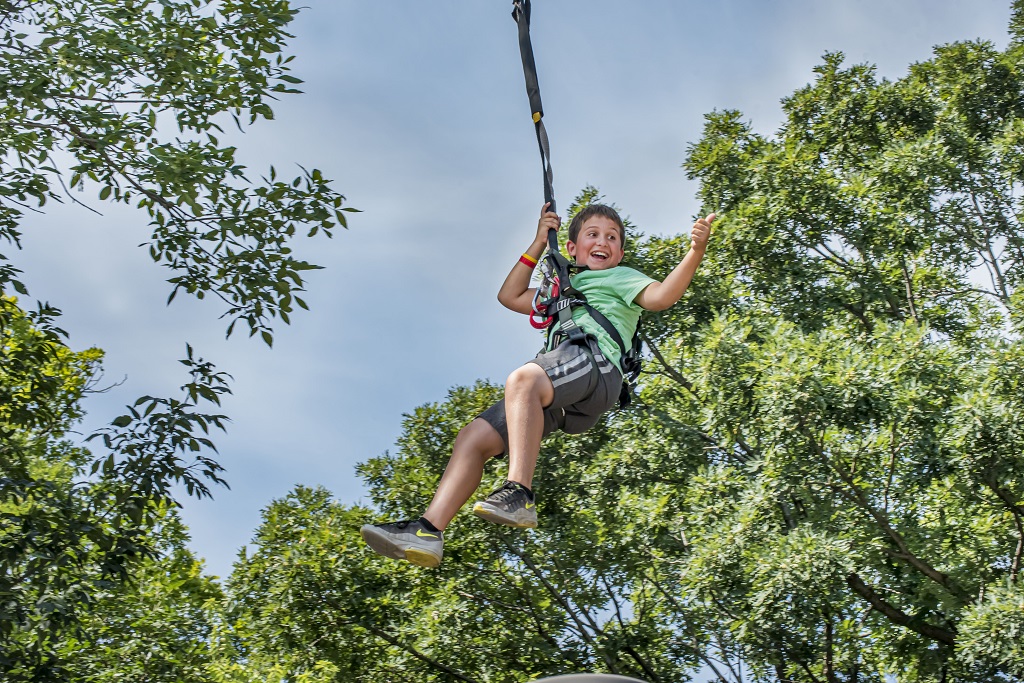 Also, in 2011, the SkyTrail® Adventure Ropes Course and Zip Line opened. This permanent activity (open spring and summer) features a 500-foot zip line and two ropes courses, one for children and one for adults. Now owned by MCZ, it has been renamed Sky Adventure Zip Line and Ropes Courses.

In 2012, the Zoo completed the renovated entrance to the Northwestern Mutual Family Farm, which includes an outdoor museum of early farm equipment and interpretive graphics.

In May 2017, the Zoo embarked on a public-private concessions partnership with Service Systems Associates (SSA). The Zoo provides concessions, merchandising and catering services with SSA, the premiere service provider for public and private cultural attractions for more than 40 years. As part of the partnership, SSA provides $3 million for capital investments, including major renovations and upgrades to the Zoo’s existing restaurants and Gift Shop.

In July 2018, the Zoo and SSA unveiled some innovative dining options for visitors. The Bear Garden, an ode to the Wisconsin outdoors, it offers an “adult-friendly” menu that includes draft beers, bottles and cans. The OOZ Food Truck is a cheese-lover’s dream, serving up grilled cheese sandwiches, mac and cheese, and cheesy OOZ fries. West End Snacks offers visitors the usual snacks, as well as strawberry and pineapple Dole Whips®, a kosher, gluten-free, and dairy-free soft-serve snack. Visitors can enjoy their snacks while watching the playful otters nearby. In fall of 2018, Nourish 414, formerly known as Lakeview Place, opened. In addition to serving traditional fare like hamburgers and hot dogs, Nourish 414 offers unique flatbreads, sandwiches and salads.

More recent undertakings included the completion of the first planning phase of a new 20-year Zoo Master Plan, which addresses improvements in animal exhibits, visitor attractions and amenities, service facilities and operations. Additional infrastructure improvements also will occur; the plan serving as a guide for the next 20+ years.

Part of the plan, the Zoo’s West Entrance, including admissions and concessions areas, merchandising and an adjacent parking lot was completed, and welcomed visitors in spring of 2018.

Otter Passage, a newly-constructed North American River Otter Exhibit featuring these popular native animals, greets guests upon entering this location. The most abundant of otter species, the colony takes up outdoor residence with their gregarious ways and boundless energy.

The plan also included construction of Adventure Africa-Phase I, an elephant and mixed species exhibit which meets the Association of Zoos and Aquariums standards for elephant care. The area features a larger, 1.6-acre outdoor elephant habitat, watering hole and 20-000-square-foot indoor Elephant Care Center. The exhibit was unveiled in May 2019. 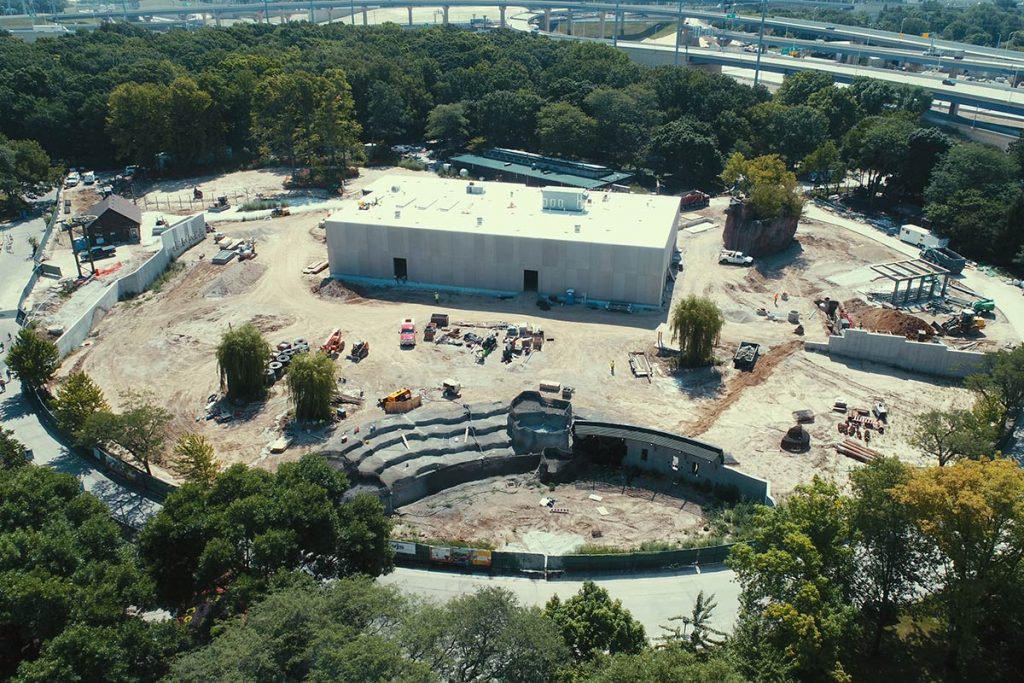 Adventure Africa is the largest physical change to the Milwaukee County Zoo since opening at its present location in 1961. The Elephant Care Center and outdoor area can accommodate up to five elephants, which allows for more social interactions and groupings. In November 2019, we welcomed a female elephant, Belle, to our resident elephants, Ruth and Brittany. After well-planned and careful introductions, Belle has settled in with Ruth and Brittany, and visitors can see the herd living together in the indoor and outdoor habitats.

The renovated Gift Shop opened in spring of 2019, and features new floors, ceiling, and fixtures with a modern look and rustic elements representing Wisconsin. The merchandise includes traditional favorites, plus apparel and toys, as well as some local and fair-trade global products. 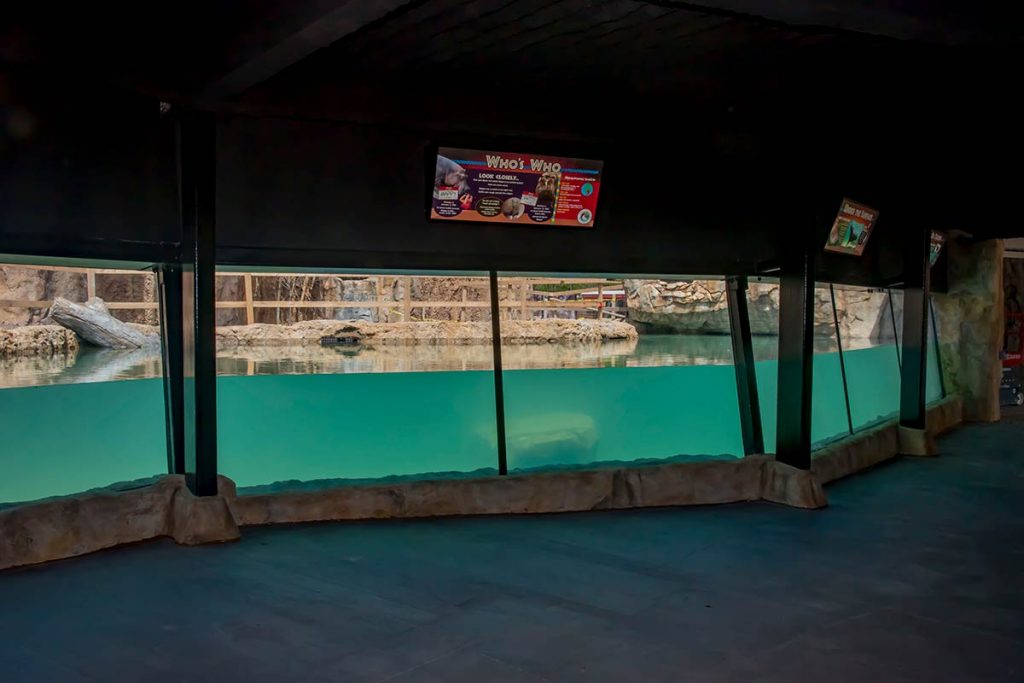 Construction for Phase II of Adventure Africa, featuring a new Hippo Exhibit, began in fall 2019, and opened to visitors in the summer of 2020. The Dohmen Family Foundation Hippo Haven significantly expanded the habitat for hippos, featuring a 60,000-gallon pool which saves more than 20 million gallons of water annually.

This expansive underwater feature allows visitors to come face to face with these magnificent and powerful animals, and at 7-feet deep, it’s 3 times larger than the former watering hole. The Milwaukee County Zoo is one of only 12 zoos in North America to offer such a unique view of hippos underwater!

The summer 2022 temporary exhibit features Dino Don’s Dragon Kingdom, sponsored by Sendik’s Food Market. Visitors step into an enchanting magical world with over 15 awesome animatronic dragons found in cultures across the globe. See the similarities and connection between animals of the natural world and mythical creatures.

Also in the summer of 2022, the Zoo unveiled Gorilla Trek, a 360-degree live-action virtual reality film with motion platform seating, to give an unprecedented look at one of nature’s most intriguing and endangered animals – mountain gorillas in their natural habitat of Rwanda. The Milwaukee County Zoo is the first zoo in the country to offer this Experience visitors won’t soon forget.

Phase III of Adventure Africa, which addresses the Rhino Exhibit, will be the next project to get underway. The design portion for renovations to the current rhino area is in process and will be completed in 2022. The exhibit will combine the current Rhino habitat with the former Elephant Exhibit and create a new indoor and outdoor home for rhinos, a new indoor area for the hippos, and a new central pathway. The new exhibit is tentatively scheduled to open in 2024.

The Milwaukee County Zoo will continue to be one of Wisconsin’s finest attractions. With its renowned animal collection, special events and exhibitions, the Zoo offers visitors a course in education, conservation and enjoyment.

For more information, please contact the Zoo’s Marketing and Communications Department at: 414.256.5466.