Spot the Gentoo Penguin Chick While You Can 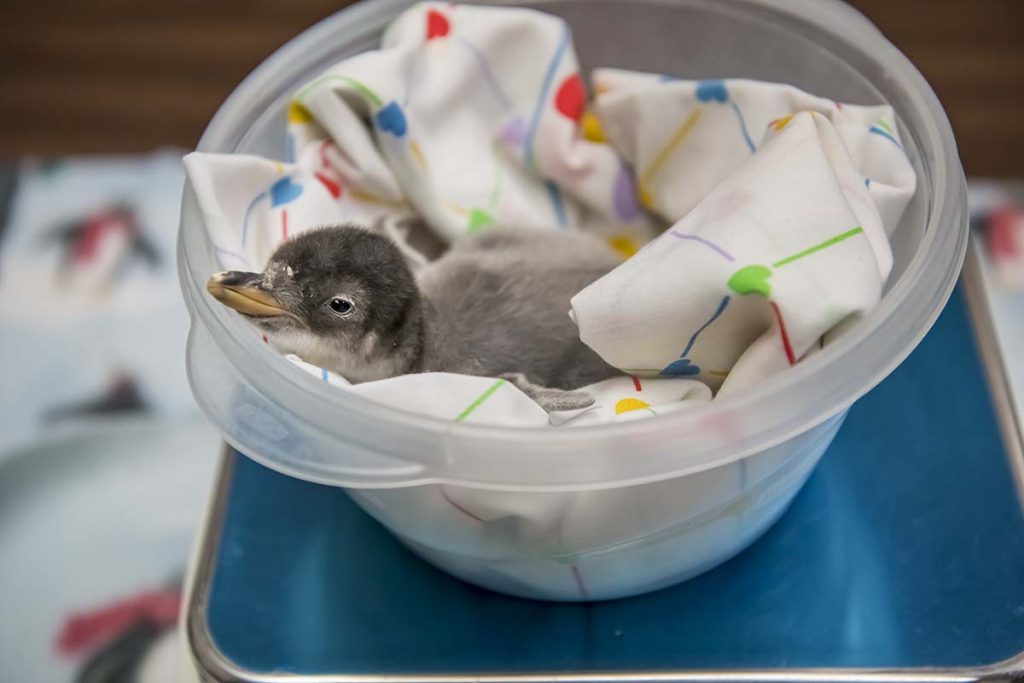 A Gentoo penguin chick recently hatched in the Aviary! Check out this fuzziness before it goes to the behind-the-scenes holding area in the Aviary for the fledging process. The chick hatched on Dec. 17 to parents Fiona and Oscar. The chick doesn’t yet have a name, and its sex will be determined by a blood sample taken when it’s about 1 to 3 months old.

Gentoo penguins are native to the sub-Antarctic and the Antarctic and listed as Stable in the wild. They’re a lot of fun to watch — zookeepers describe them as very curious, active birds who are always up to something!

This chick weighed 107 grams at its first weigh-in, and during a weight check, the chick also received a physical exam. The animal care team’s exam included listening to the heart and lungs; giving an overall look to make sure the feathers and skin looked healthy with no wounds; and checking the umbilicus (or “belly button”) to make sure it was closed, hydration status, that the beak was straight, and that its feet and legs/wings were normal.

Zookeepers report that the chick is growing quickly, and that Oscar and Fiona are doing well caring for it. At this point, they’re old pros, as several of their other offspring also live in the habitat (for now, before ultimately being transferred to another approved facility for breeding). The chick feeds from its parents’ beaks, eating partially digested and regurgitated fish.

It’s quite lively right now, so Oscar and Fiona are primarily sitting on it or standing next to it to keep the chick warm for the time being. Gentoo penguins instinctually never leave their offspring unattended for the first month of life. And they shouldn’t, because the chick doesn’t yet have waterproof feathers and it could start wandering outside the nest and possibly fall into the water. Gentoo chicks are technically able to swim, but it wouldn’t yet be familiar with the Zoo’s pool or locations to be able to easily exit it. The chick may also be vulnerable to a bit of “harassment” from other juvenile penguins in the habitat.

Around mid-January, the chick will go behind the scenes for “fledging,” where zookeepers will teach it how to eat on its own and participate in scale training. Gentoo penguins are generally friendly and easy-going, and they enjoy receiving individual attention. By the time it gets reintroduced to the public about 4 to 6 weeks later, after its waterproof feathers come in, it will be hard to tell it apart from its parents! And Oscar and Fiona are only one of two pairs of Gentoo penguins that have a breeding recommendation at the Zoo. The other breeding pair didn’t have a fertile egg — making this chick the only one of 2022.