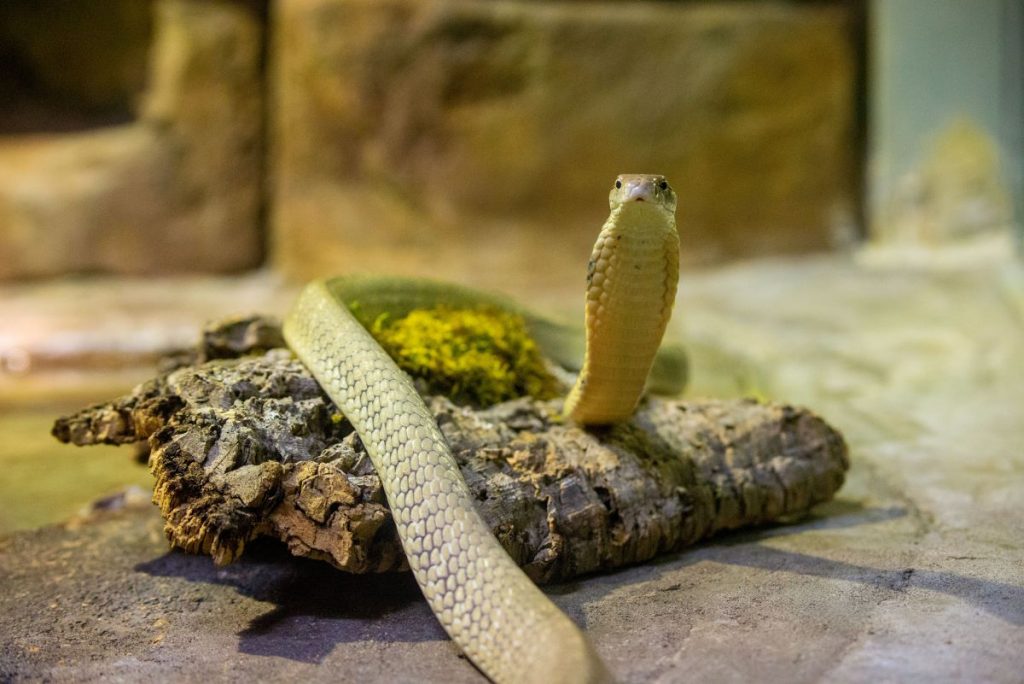 The king cobra is the largest venomous snake in the world. Despite their large size and fearsome reputation, they aren’t aggressive and will avoid confrontation when possible. When in a threat display, king cobras can raise the anterior part of their bodies 3 to 4 feet off the ground and are able to follow an […] 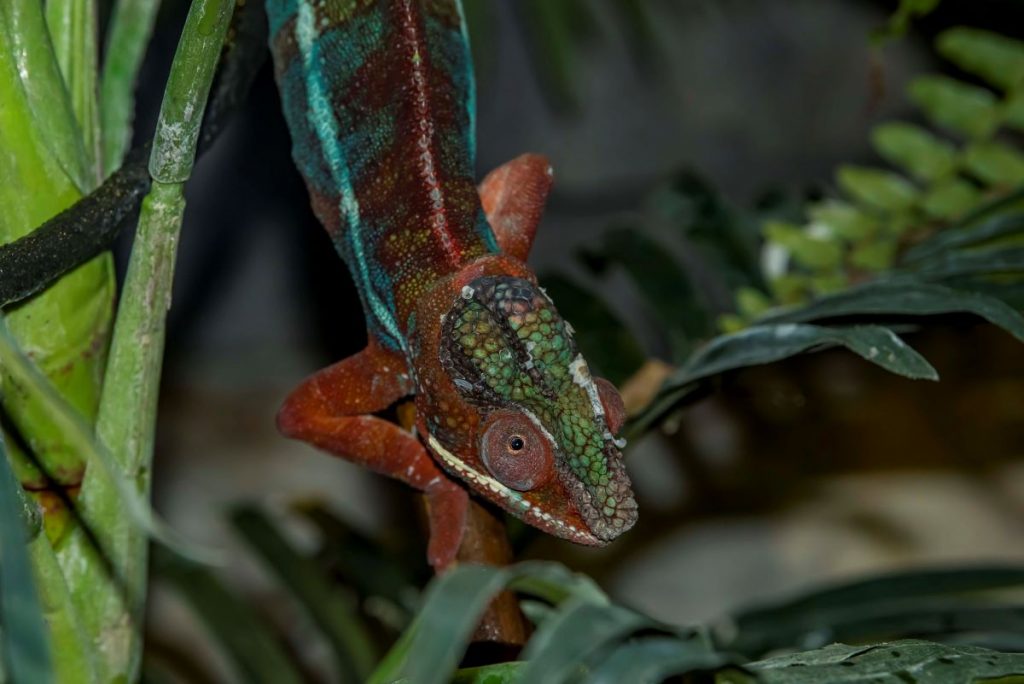 A panther chameleon’s eyes move independently but focus together on prey to provide stereoscopic (also known as binocular) vision with depth perception. Their feet are zygodactyl, like parrots, with two toes pointing forward and two pointing back — making them great climbers. Panther chameleons are able to quickly change colors, but they do this to […] 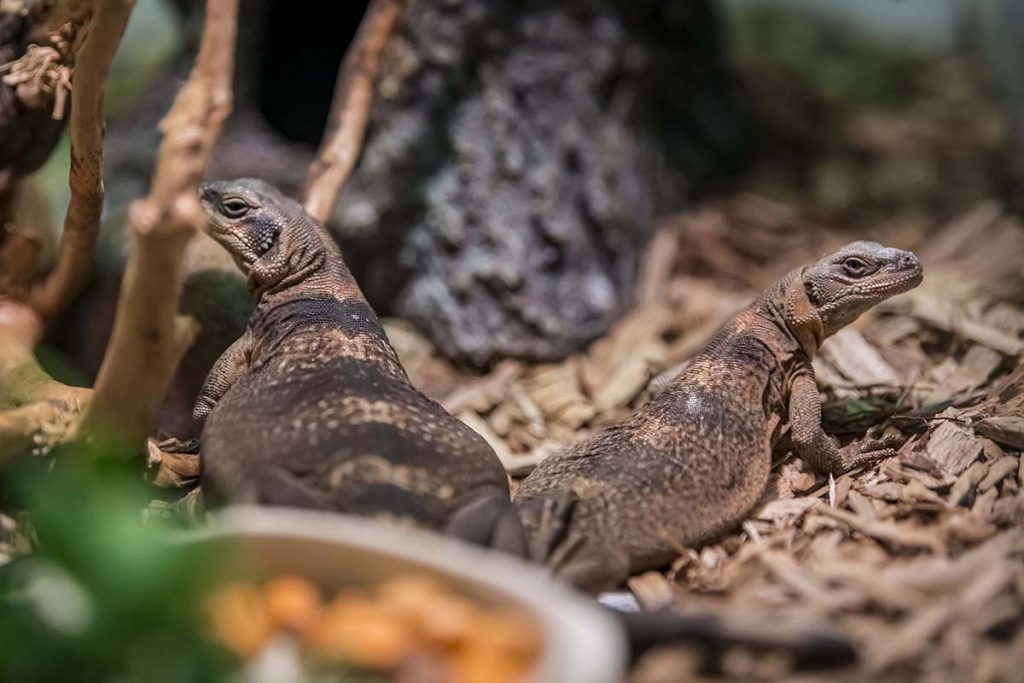 The chuckwalla belongs to the iguana family of animals. Chuckwallas are petite, averaging just 6.4 inches in length, but adults can reach lengths of over 15 inches. To escape predators, they take shelter in small holes and crevices, inflating its lungs and expanding its skin to wedge itself into place. The colors of a chuckwalla […] 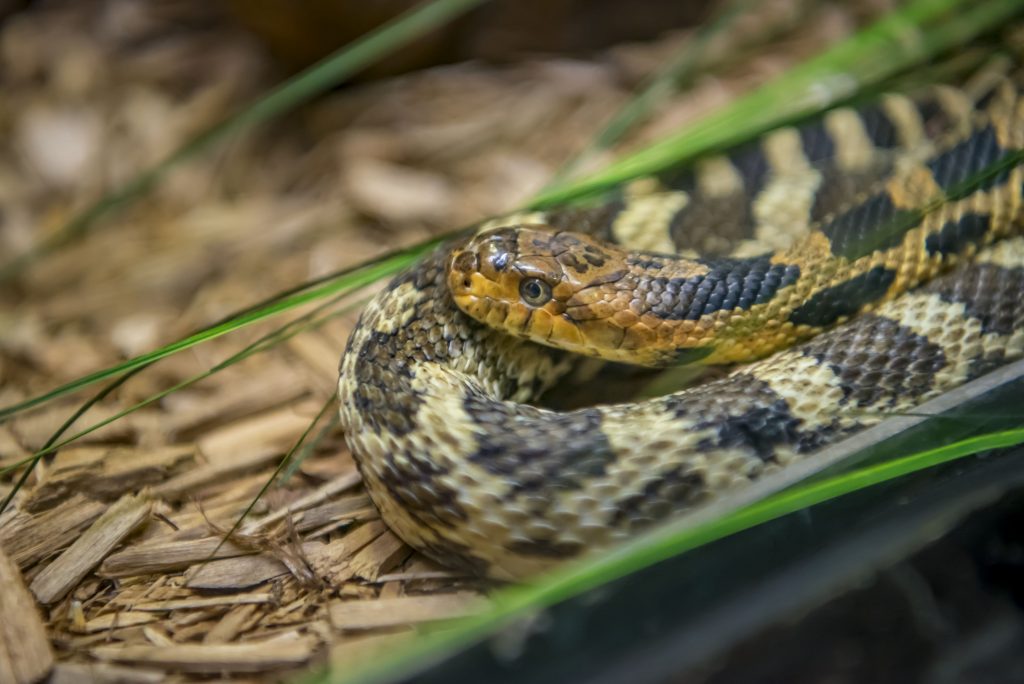 Eastern fox snakes are often mistaken for rattlesnakes, as they “rattle” their tails when disturbed. When threatened, these non-venomous, docile snakes may also give off a stinky musk from glands near their tail. This musk has an odor like that of the red fox, hence the “fox” in their name. They’re found in every county […] 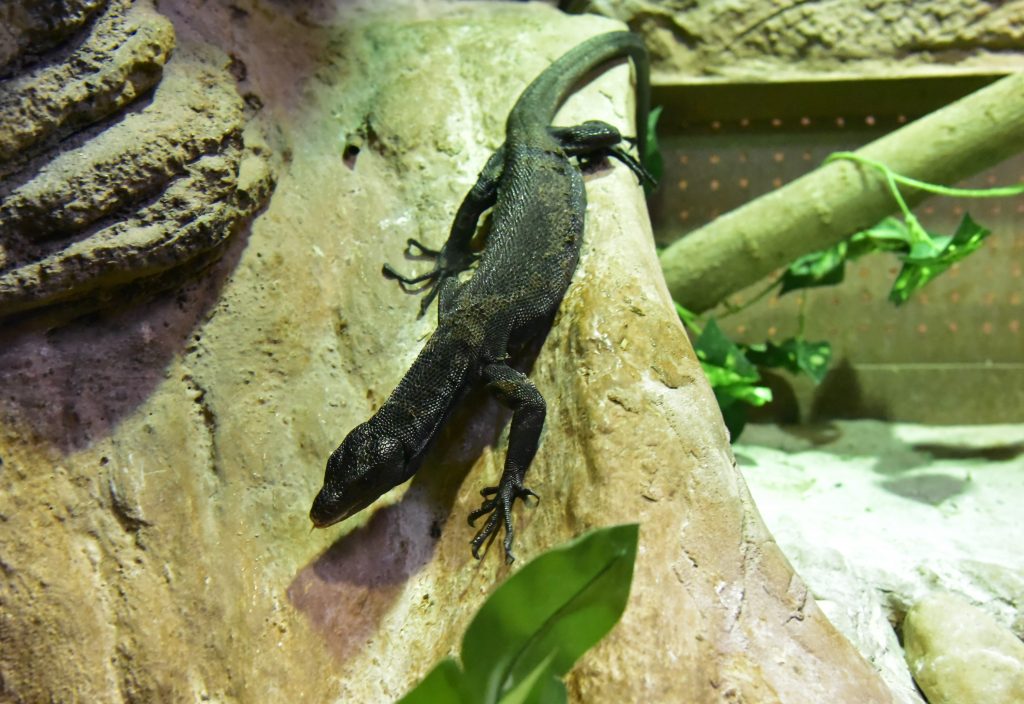 Black tree monitors have prehensile tails that are two-thirds the size of their bodies. Their tail acts like a fifth leg and helps them balance in the trees, while sharp claws enable them to grip onto branches. Like other monitor lizards, they’re highly intelligent and demonstrate complex problem-solving abilities, fine motor coordination, and skilled forelimb […] 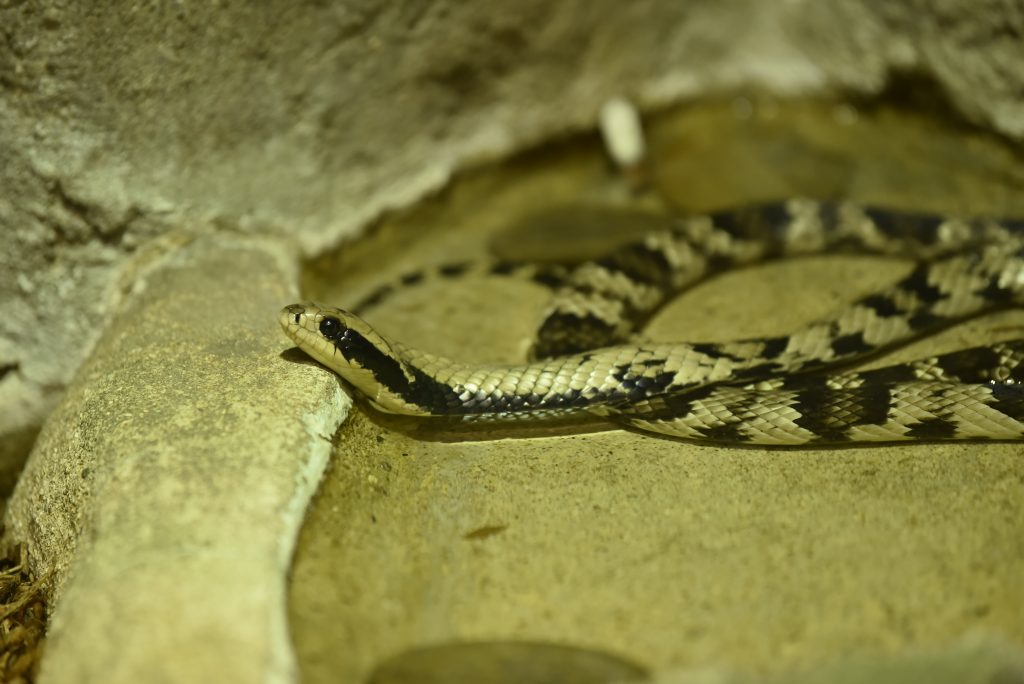 This species is named for its ability to flatten its neck to appear larger, giving the appearance of a cobra. However, unlike a true cobra, the false water cobra doesn’t prop itself up vertically but maintains a horizontal position. They hunt by grabbing and partially coiling their bodies around prey, then swallowing it live. 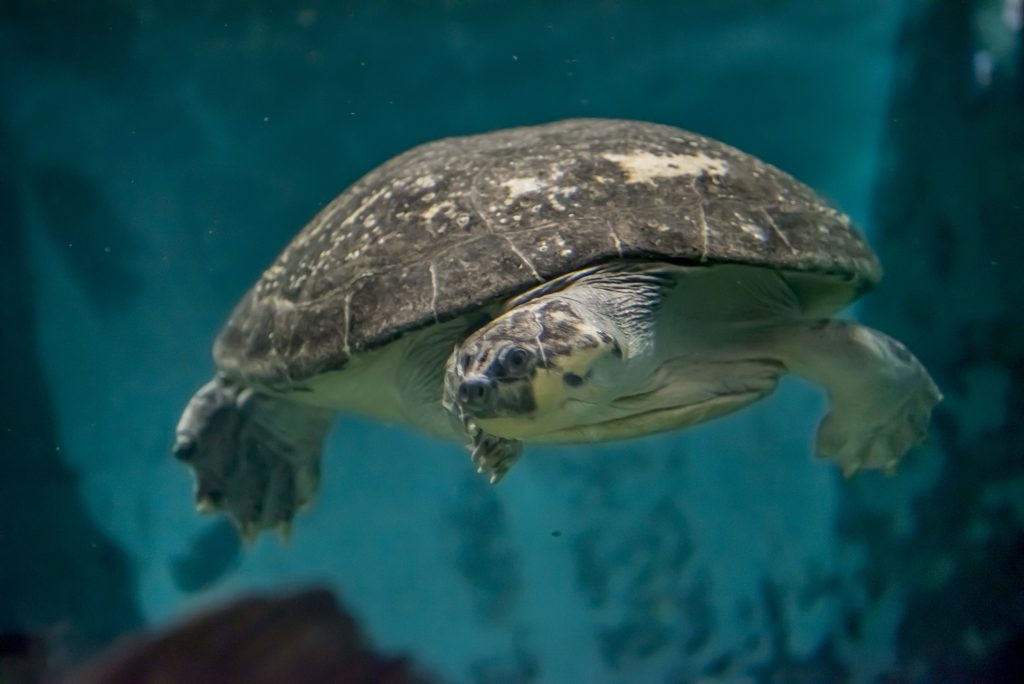 This turtle lives in the Amazon and Orinoco River systems. It’s part of the family Pelomedusidae, which contains the side-necked turtles. These turtles have a long neck that can be withdrawn horizontally within the shell, leaving it partly-exposed, rather than retracting it in a vertical “S” bend as in most other turtles. 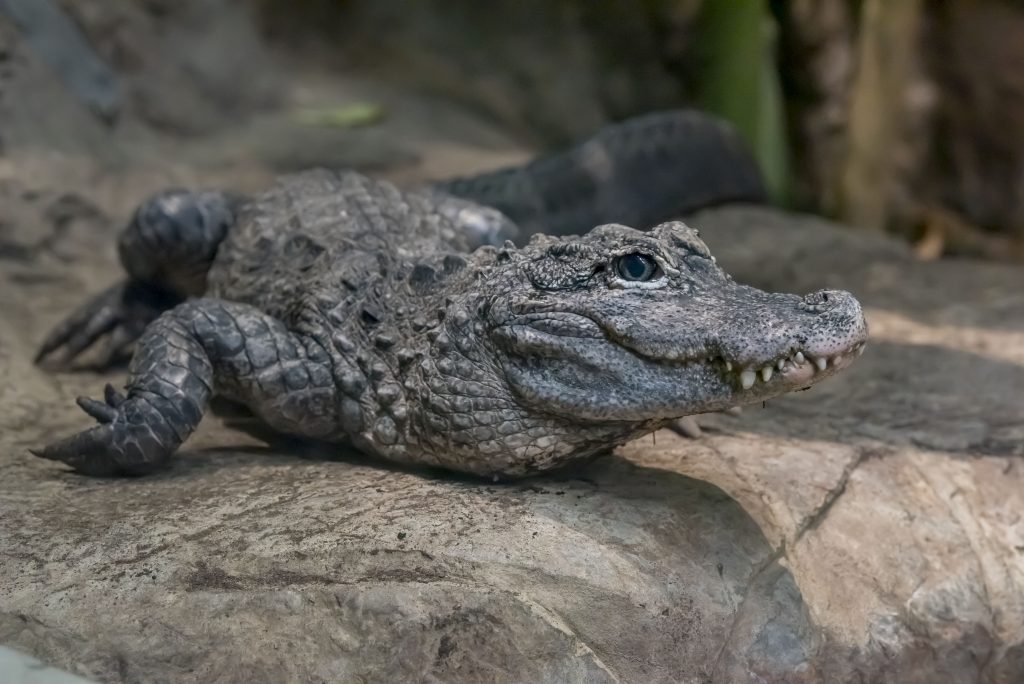 The Chinese alligator is one of the smallest crocodilians and one of just two alligator species in the world (the other being the American alligator). The native name for this species is Yow-Lung or T’o, meaning “dragon,” leading some to believe that the mythical Chinese dragon was, in reality, the Chinese alligator. 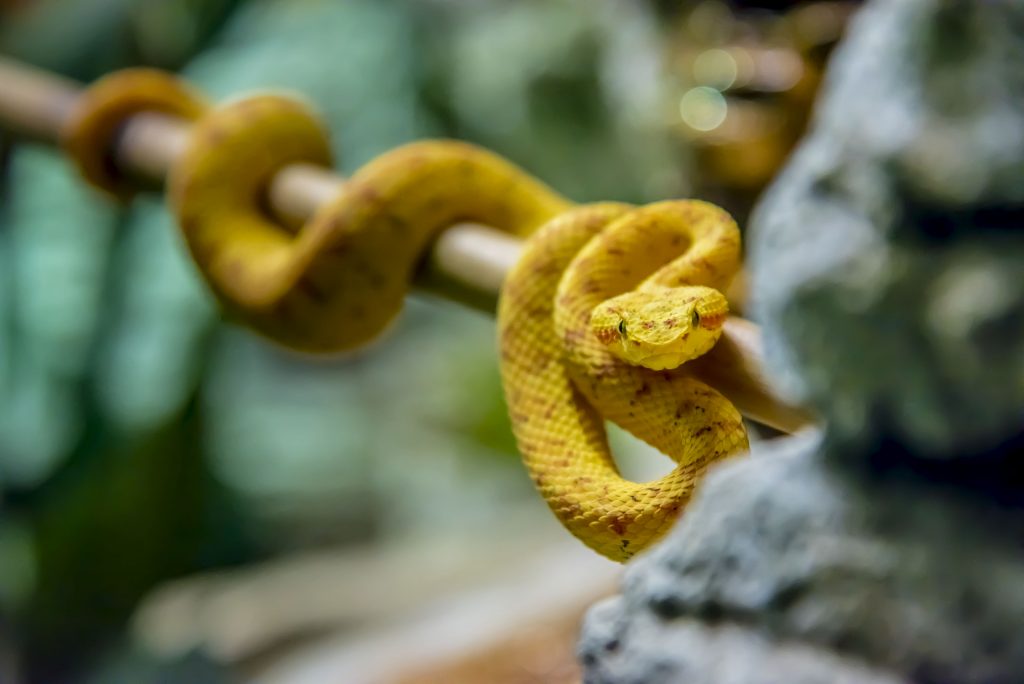 The eyelash viper’s most distinguishing feature is the supraciliare, or enlarged scale, above each eye, giving the appearance of “eyelashes.” These snakes are small and light in order to effectively maneuver through shrubs and trees and avoid detection by prey. It moves readily between the forest ground and canopy and is often found in banana […] 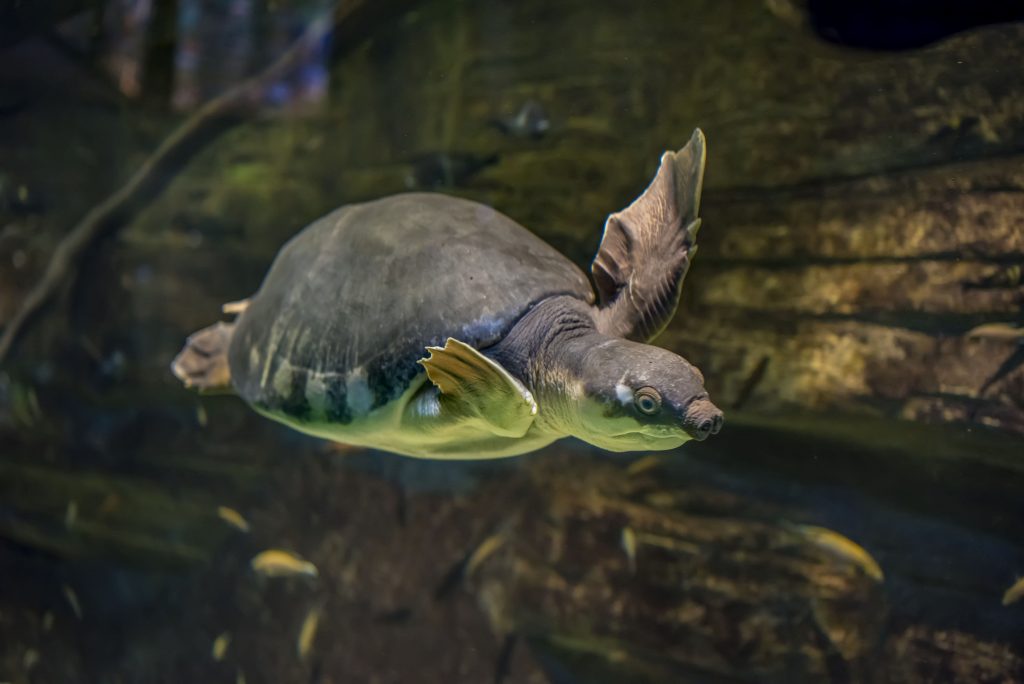 Sometimes called the pig-nosed turtle, these reptiles only leave the water to nest. They are a secretive animal, mainly hunting and active nocturnally. Its flipper-like forelimbs make it a powerful swimmer. 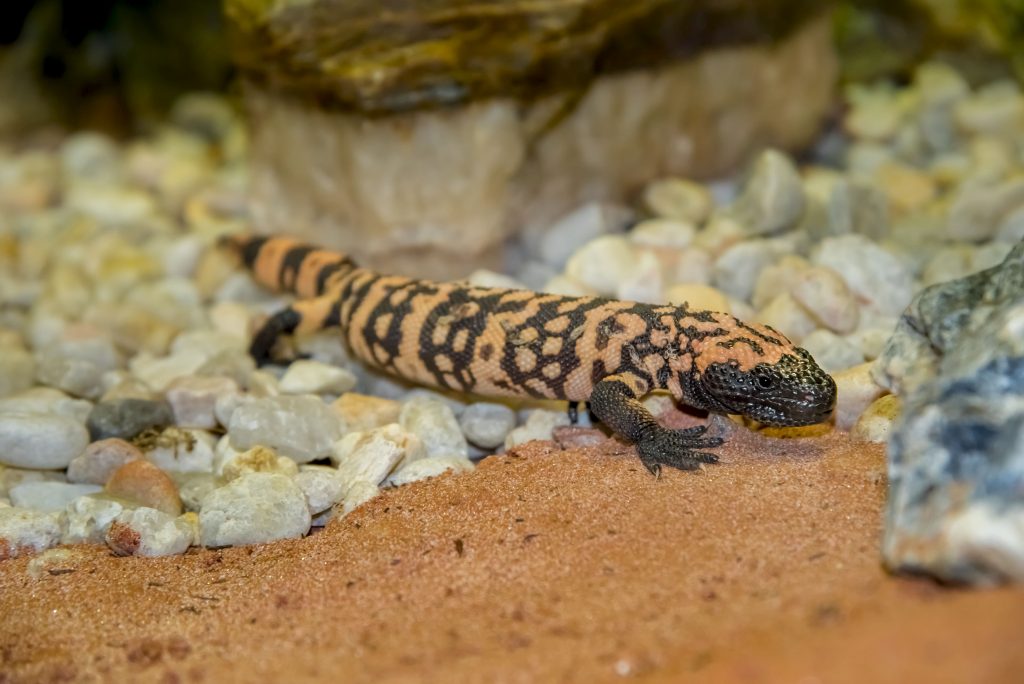 The Gila monster is named after the Gila River in Arizona and is the most venomous lizard native to the U.S. The Gila monster eats large meals infrequently, with a fat reserve stored in its tail, and can consume a meal of one-third of its body weight. They are immune to their own venom — […] 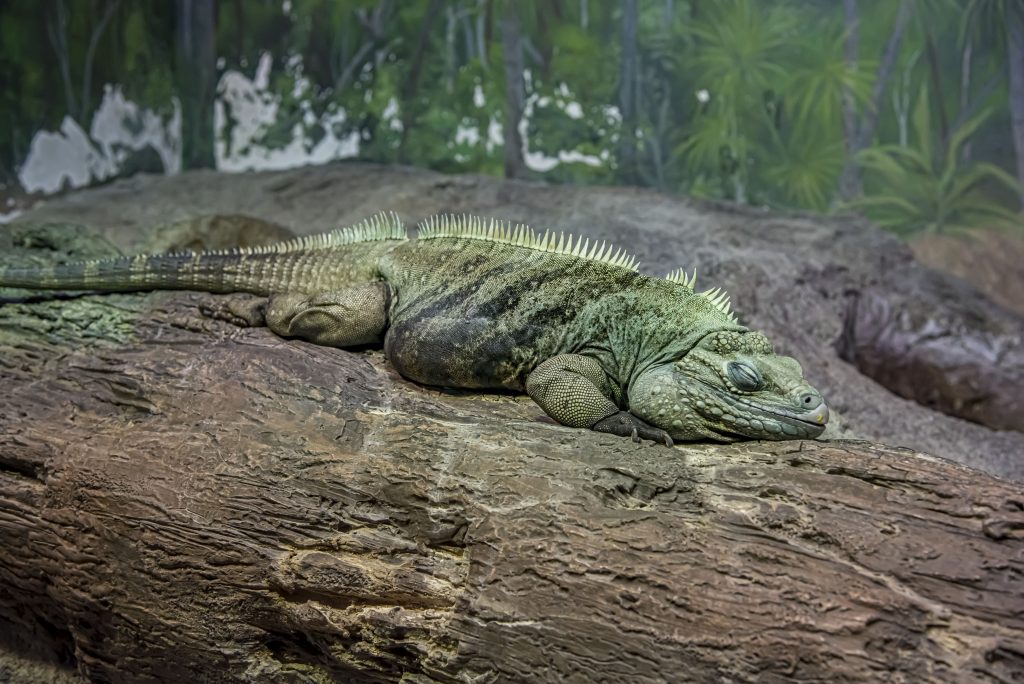 The blue iguana is a “flagship” species — essential for maintaining the delicate balance between climate and vegetation necessary for the survival of the Grand Cayman ecosystem. During mating season, hormones color the males a bright, electric blue and the females a muted powder blue. 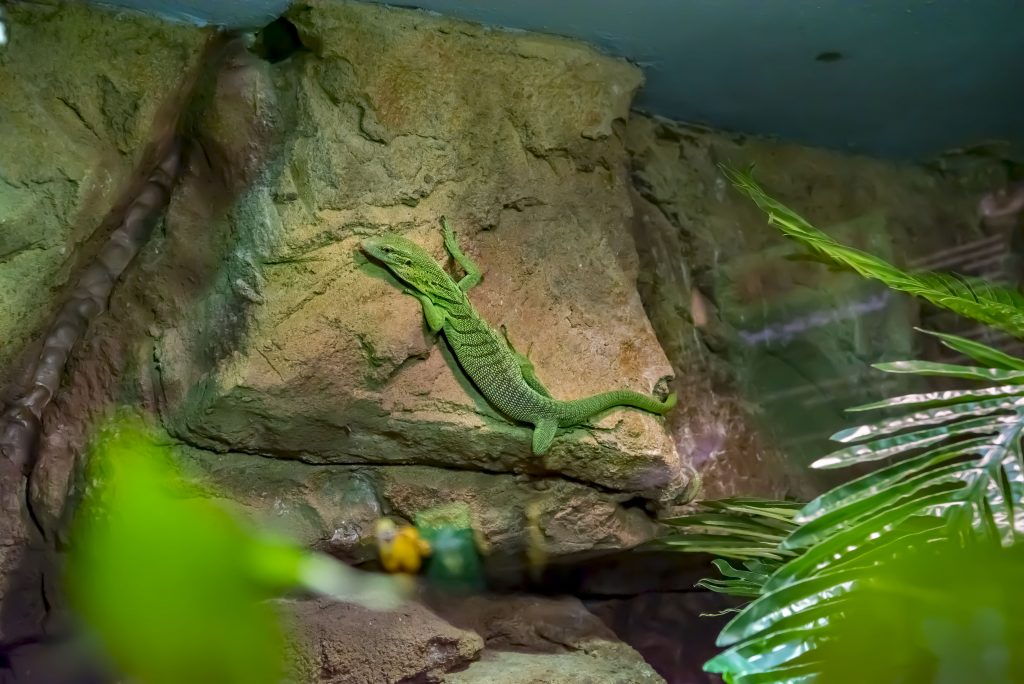 Also known as the emerald monitor, they live in palm stands and rainforests with about 70% relative humidity. The tail of the monitor is prehensile and works like a fifth foot. These reptiles sleep in branches, holding on with one or two claws and their tails wrapped around a branch. 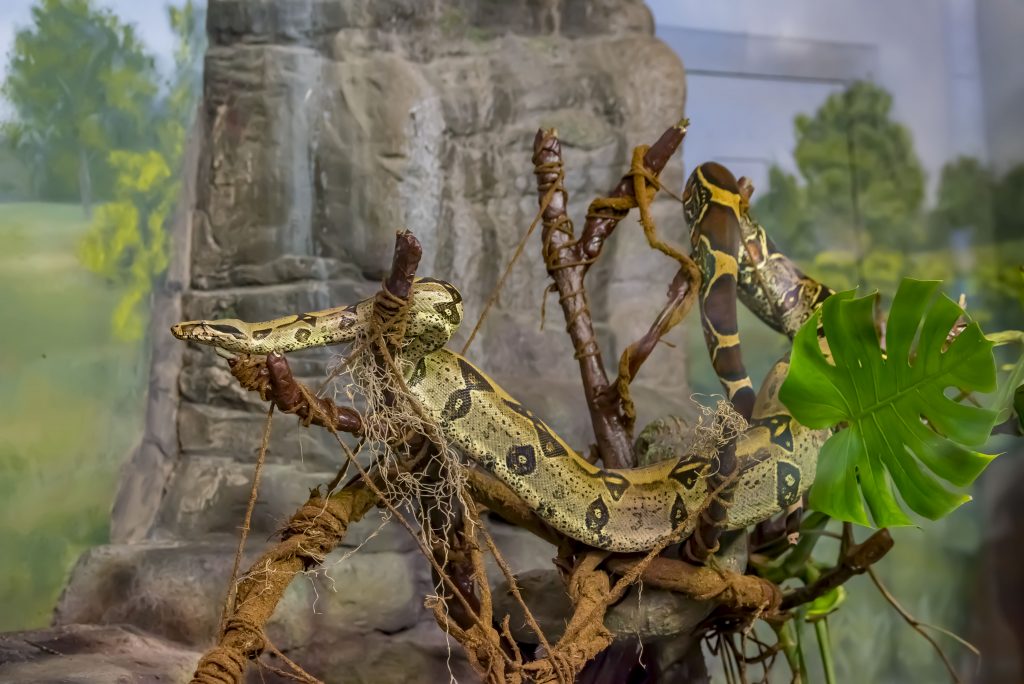 Red-tailed boas are ambush hunters; they will squeeze their prey, killing it by shutting down blood supply to vital organs and swallowing it whole. A large meal can sustain them for up to one month. They also have prehensile tails that can grip tree branches. 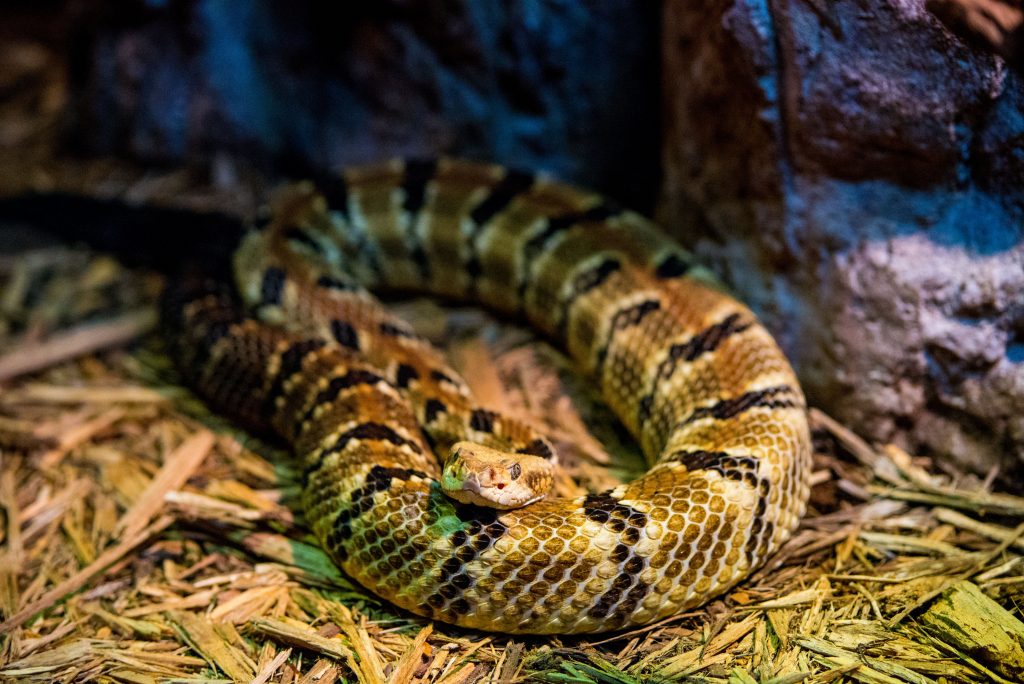 The timber rattlesnake swallows its entire prey whole, then retreats to a sunny basking site in order to raise its body temperature to 80-85°F for proper digestion. Every time the snake sheds its skin, another ring is added to the rattle. 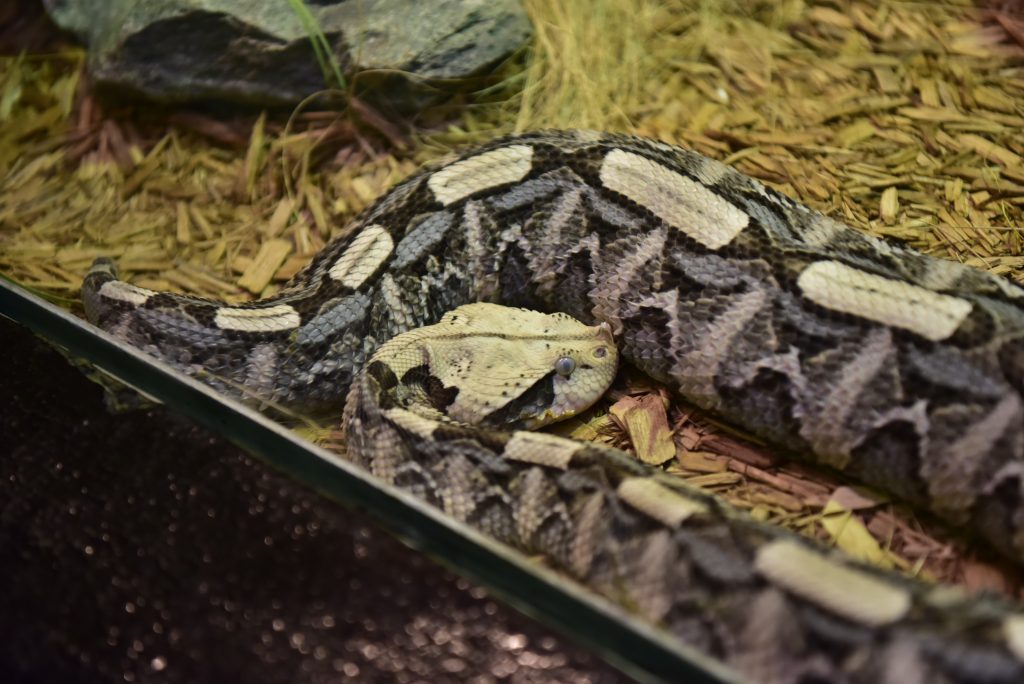 The gaboon viper is one of the heaviest snakes in Africa. With large fangs that can reach up to 2 inches in length, they have the longest fangs of any venomous snake in the world. They average 4-5 feet in length — females are often longer than males.