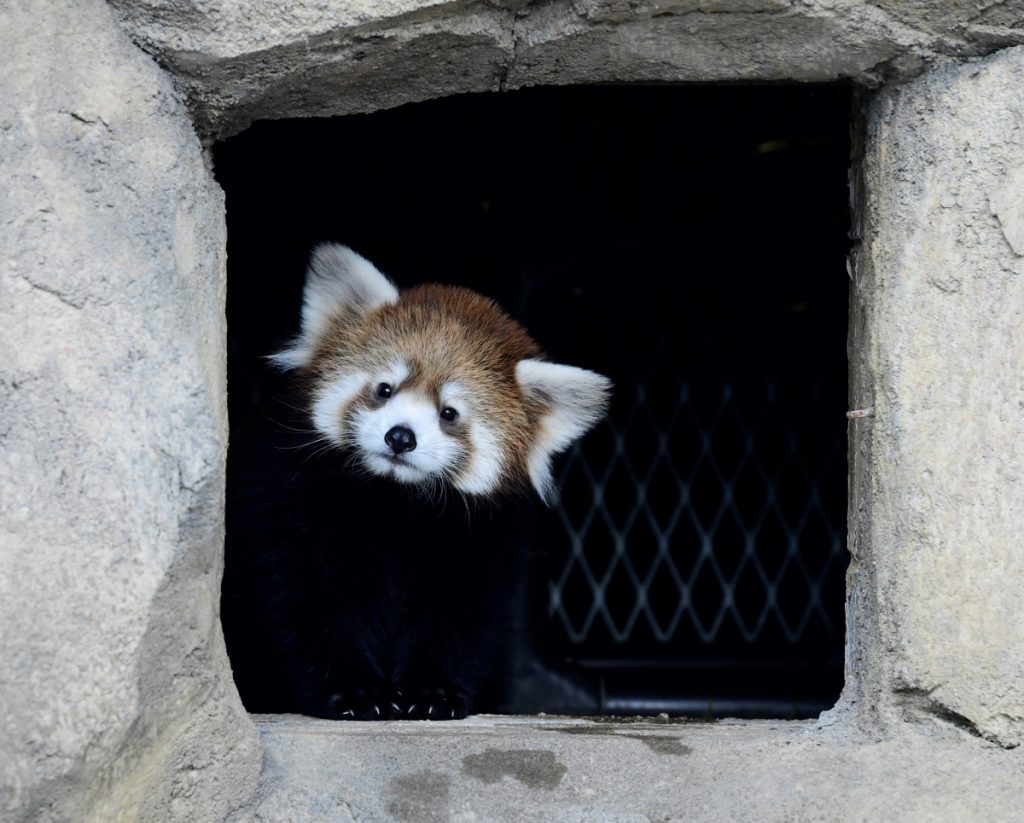 The animal care team has been working with Cinder over the past few weeks to introduce her to the outdoor habitat. They comment that it’s been a very slow process, as she is much more cautious than the previous two cubs born here. Mom, Dr. Erin, is always out in the habitat with Cinder, and at first the cub was super cautious, and a bit unsteady, but now she’s doing a lot better. Keepers say she especially likes climbing the trees in her habitat! She’s still learning how to use her tail to balance, so sometimes it’s curled up around her.

For now, Cinder will be in the outdoor habitat with Mom part of the day, and as time goes on, she’ll gradually spend more time exploring her new home.

We’re progressing closer to Cinder being introduced to the outdoor habitat and visitors!

Cinder is now 3-months-old and has been starting to venture out of the nest box on her own, although she’s not yet climbing down from the box.

Mom, Dr. Erin, continues to dutifully clean, nurse, and snuggle her, as keepers begin to introduce solids (softened biscuits). Cinder recently tried a grape for the first time and really enjoyed it.

Stay tuned and check back as Cinder makes strides toward the outdoor habitat!

Our red panda cub is named Cinder — although she’s recently turned from gray to red! — and keepers report that she’s still growing by leaps and bounds! Her eyes have been open for a couple of weeks, and she’s scooting around the nest box. Mom, Dr. Erin, is spending quite a bit of time outside in the mornings while keepers clean inside. Dr. Erin gets supervised access time to her habitat to ensure she isn’t bringing Cinder out before it’s ready to navigate the logs on its own. We anticipate that Dr. Erin and Cinder will be out for the public to see in another month or so!

The “Baby Boom” continues at the Milwaukee County Zoo, with a red panda birth on June 12! This is the third cub for mom, Dr. Erin, and father, Dash. The female cub is part of the Red Panda Species Survival Plan® (SSP), which helps to maintain genetic diversity within red panda populations in AZA-accredited zoos.

The cub, who is not yet named, was born mid-day Sunday, June 12, in an off-exhibit area, in a secluded and quiet nest box. Keepers can closely monitor the nest box with special cameras. At about 24 hours after the birth, the cub weighed 144 grams; on the second day, keepers recorded a weight of 196 grams — weights will continue to be recorded when mom and cub are comfortable with a short separation time to place the cub on a scale.

Keepers report that Dr. Erin and the cub spend almost the entire time together in the nest box. Because Dr. Erin has had previous offspring, she is an experienced mother and is attentive and nurturing toward the cub. Red pandas are also attentive mothers in the wild, keeping the cubs hidden in a nest for the first 2-3 months of life.

The cub now relies on mom for milk, nursing for the first 13-22 weeks of life. At 4-6 months, she’ll begin to wean from mom, and keepers will start to introduce solid food to her, softened in water. She’ll be with mom for the first year of life, following her around the habitat and learning how to climb.

It’s interesting to note that the cub does not have red fur when it’s born; rather, it’s gray, and will turn red over the next couple of months. In a few months, the cub will be in the outdoor habitat, visible to the public.

In the wild, red pandas live in the mountains of Nepal, northern Myanmar, and central China. Red pandas are considered endangered due to deforestation, poaching, and trapping. Reliable population numbers are difficult to find due to the pandas’ secretive nature, but it is estimated that only about 2,500 individuals exist in the wild. Because of this low number, every red panda birth is significant.*

*Red Panda Network raises awareness in red pandas and the importance of their conservation. 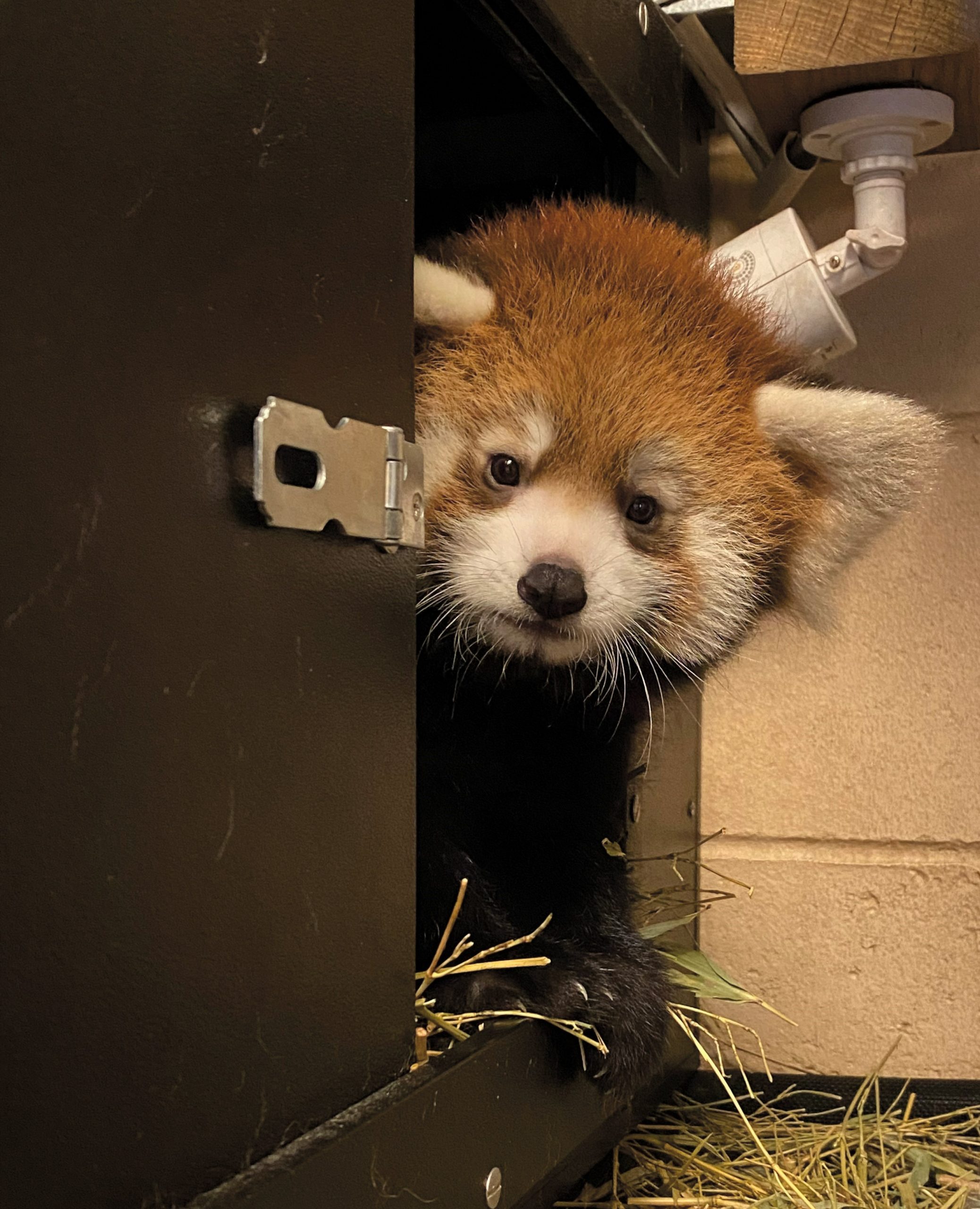 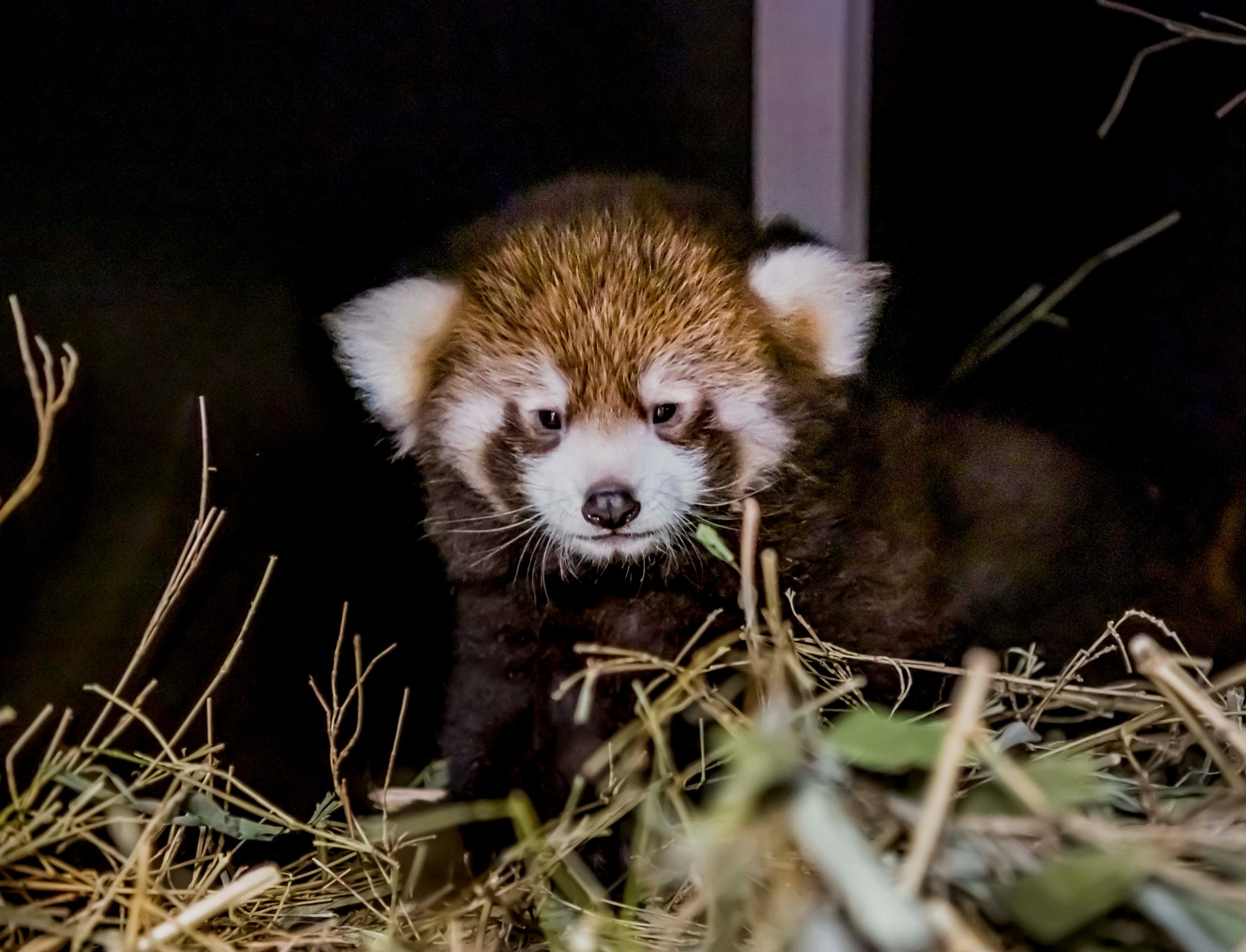